How to survive in a prison of Russia, Ukraine and post-USSR countries

Life in a prison - all you want to know about laws, customs and everydays life of a russian prison 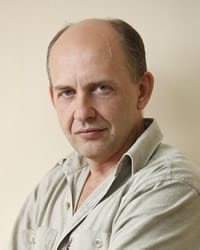 My name is Vitaly Lozovsky. Was born in 1966. Live in Kiev, Ukraine.

I have spent 3 years in penitentiaries, having visited 12 different prisons of Russia and Ukraine. Subsequently I have written the book «How to survive and spend time with advantage in prison» (more than 400 thousand readers). Participated in a considerable quantity of TV and radio programs as an expert on customs of the criminal and prisoners society. Was an adviser at creation of some art and documentary films. Lead some Internet projects helping prisoners and their relatives. Give consultations.

I have a wide range of contacts among former and present prisoners in Russia, Ukraine, Belarus, Kazakhstan and other countries of the former USSR, writers and experts, so I have complete idea about a current state of affairs in the penitentiary system here.

I can render services:

I do not provide legal services, but I can help with search of reliable ones.

Some possible themes for journalists, writers and script writers: